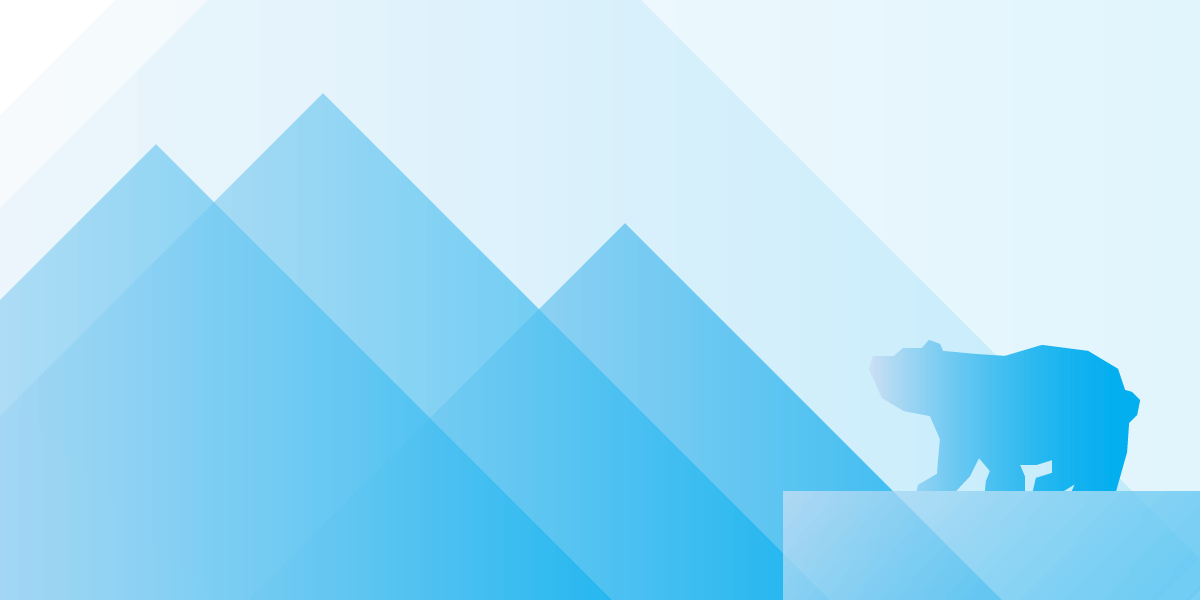 The oldest hidden place of pottery in the Tohoku region, Aizu Hongo.
Consistent thoughts of the various creators.
Seto–machi, Aizu Hongo. On the main street that still resembles the time of Showa, with the narrow streets separated from Seto–machi Street, 13 potters exist interspersed. The potters blend into the houses lined up. Visitors pass by without recognizing the kilns, and walk back laughing.They enjoy visiting the potters of Aizatsu Hongo-yaki like a maze, as if they were going back and forth between time and space.

Aizu Hongo-yaki. It may be too unknown, for the place of origin of the oldest pottery in the Tohoku region, with more than 100 potters in its golden age.Because it was located in Aizu, a fertile basin, it was enough with demand within the area, and the characteristic of Aizu people that avoided to sell their own work may have made Aizu Hongo the hidden place of pottery.

What makes Aizu Hongo-yaki interesting is the richness of the individuality of each of the 13 potters.The fact that pottery and porcelain are made at the same time itself is rare as a production area, but furthermore, the style, the direction and the way of thinking are so diverse you would wonder if you could generally call them Hongo-yaki. But now, each potter is holding hands together to leave the rare production area of Aizu Hongo-yaki. Consistent thoughts of various creators.

That is Aizu Hongo-Yaki. We gathered new works created by the potters with different style, incorporating tradition, history, and era. Together, with the thoughts of the creators. 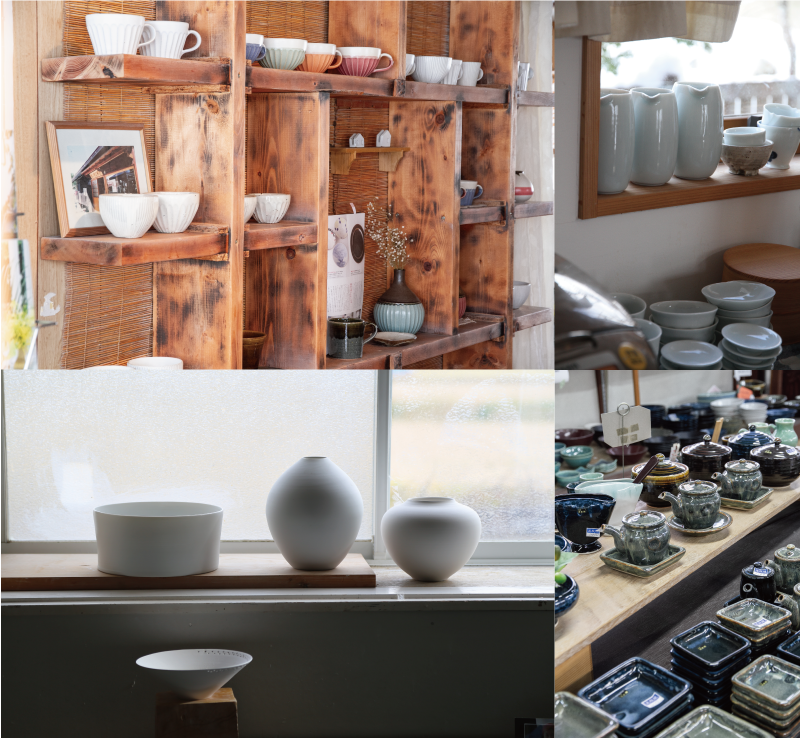 History and Tradition
The origin of Aizu Hongo-yaki which is said to be the oldest place of pottery in Tohoku was 1593. The start of its history is said to be when Lord of Aizu Wakamatsu Castle Ujisato Gamo invited tile workers from Harimanokuni (Hyogo Prefecture) to bake roof tiles for refurbishment of the castle. It was about 400 years ago, in the Azuchi Momoyama period.
It was in 1645 that the pottery actually started to be baked in Hongo. Potter Genzaemon Mizuno from Minokoku Seto who was invited by Aizu lord Masayuki Hoshina found the original soil in Hongo village, and began making ceramics specifically. This is the origin of pottery of Aizu Hongo-yaki.
Meanwhile, porcelain waits for its appearance until 1800. The clan who tried to make porcelain with Okubo potter stone discovered in Hongo village sends Ihey Sato into Arita. After Ihey returned home after learning skills risking his life, the clan established a Bizen style climbing kiln.

The Aizu clan placed its magistrate’s office in Hongo and put strength in it as the industry of the clan, but with the abolition of the magistrate’s office, the remaining soil and tools were given to the craftsmen, who built their own kiln, and started making pottery. This is the beginning of the potters.
hongo-0075
image-0009
image-0042
image-0013-800x533
image-0015-800x533
image-0018-800x533
image-0005-800x533
image-0003-800x533
image-0037-800x533
Pottery and Porcelain
In Aizu Hongo-yaki there are Tsuchimono (pottery) that follows the flow of tile baking and Ishimono (porcelain) made from Okubo potter stone.It is the only product of pottery North of Kanto made from stone.In the golden age of Aizu Hongo-yaki, there were more than 100 potters, large and small.It is said that there was not a day when smoke did not rise from Hongo's climbing kiln.
Teapots, earthenware teapots, perforated plates, and flower vases are famous, but especially for teapots, a Hongo potter invented the strainer part of the teapot in the late Meiji era, and became certified as the best in Japan, for it flowed smoothly. 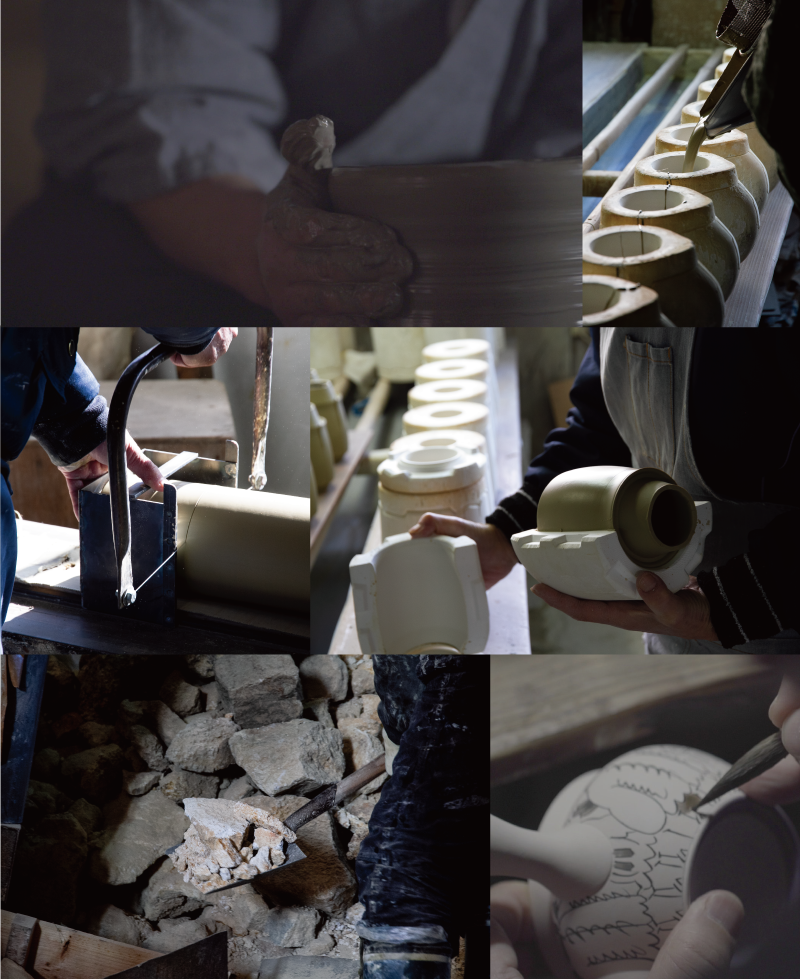 KAYANO-GAMA
The light of Show shines into the space enveloped by memories.The characteristic of Kayanokama is the method of painting shades that are made by repeatedly placing brushes. All pottery and porcelain are biscuit-fired once, glazes are formulated from several kinds, and brushes are placed over and over. The proportion of color blend, how to paint, the temperature of the kiln, the condition of the fire ... The shading changes according to the subtle difference between them, and every single one is finished in a different pattern. 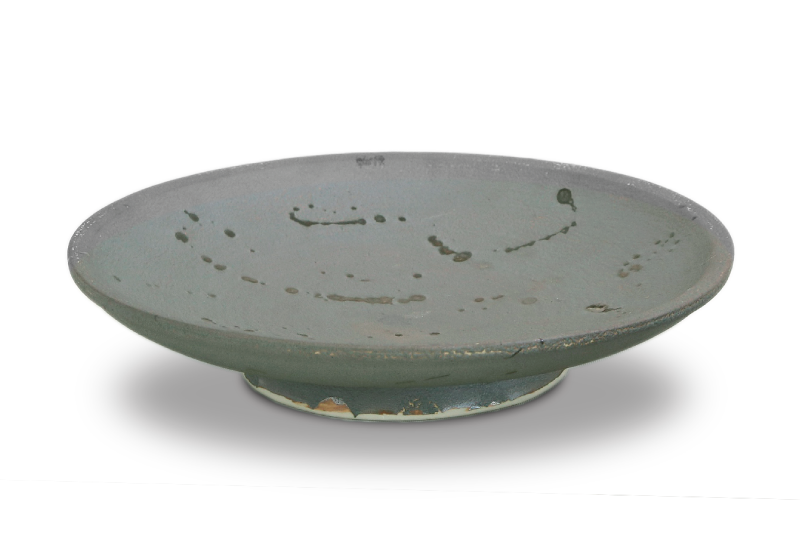 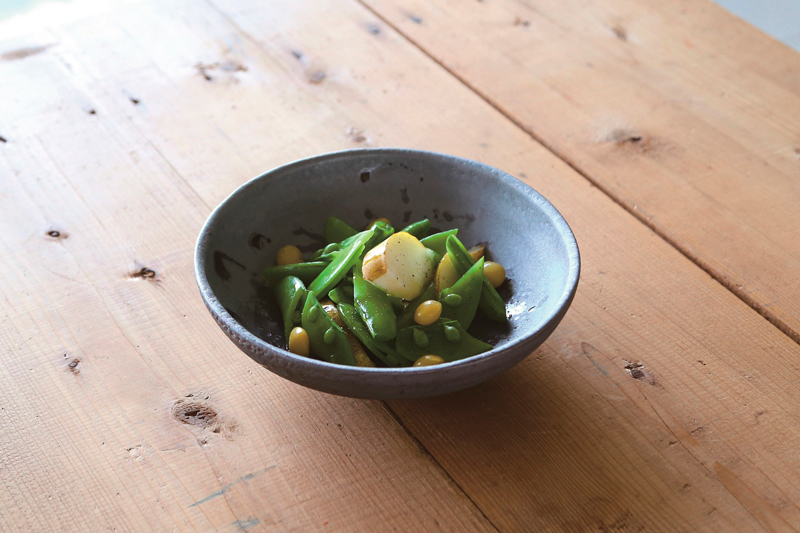 KANZAN-GAMA
Passed down through generations,The curiosity towards creation.
Ever since the first Kanzangama started in the Horeki–age, Kanzangama has been in the pottery industry for about 280 years. Its characteristics lie in its innovative design and its high level of technical ability to use various techniques such as celadon, white porcelain, and carbonization. An inquisitive mind trying to produce something new, and the unique worldview created by insatiable curiosity towards creation can be seen through the work. 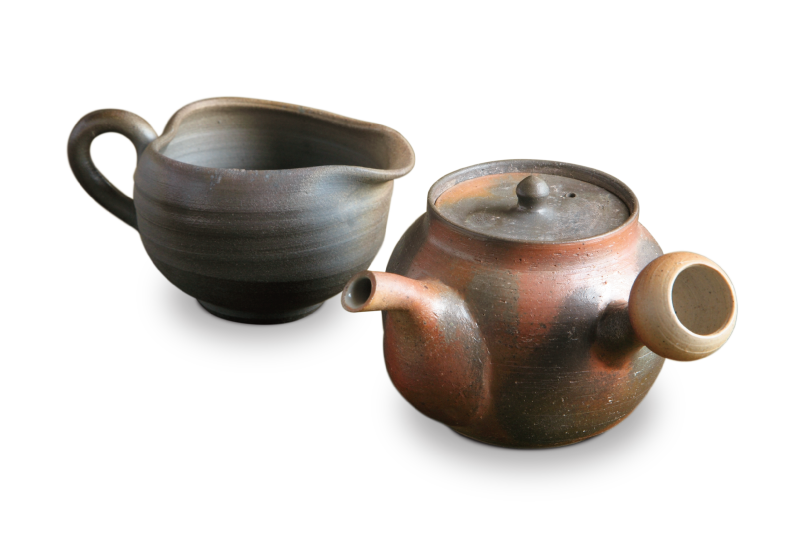 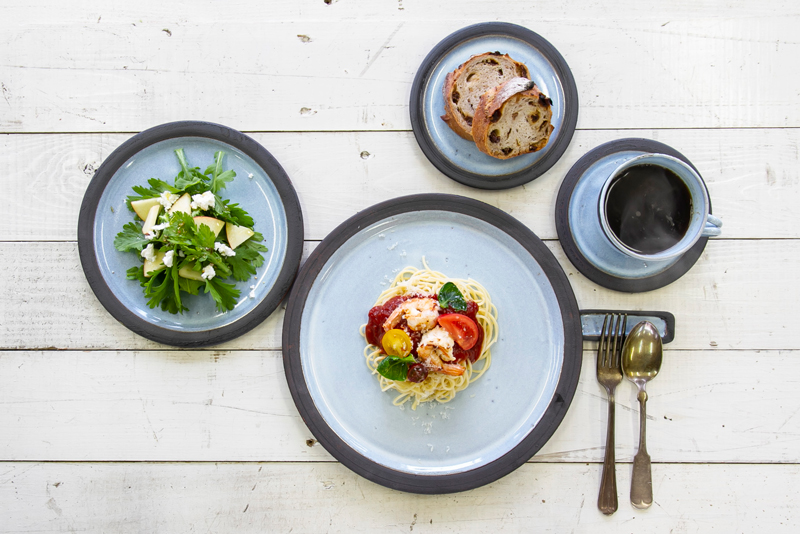 KINOOTOKOUBO
Two young artists who expanded the possibilities of Aizu Hongo-yaki. The characteristics of KinootoKobo are Shinogi and painting. "Shinogi" is a pattern of vertical stripes made by carving the surface of the pottery with a plane, which can express the beauty of the line and the softness of hand carving. On the other hand, painted potteries are decorated with lovely patterns, such as plants and animals, on a natural white ground of soil. Both are simple and modern. Young sensibility extends the possibilities of Hongo-yaki. 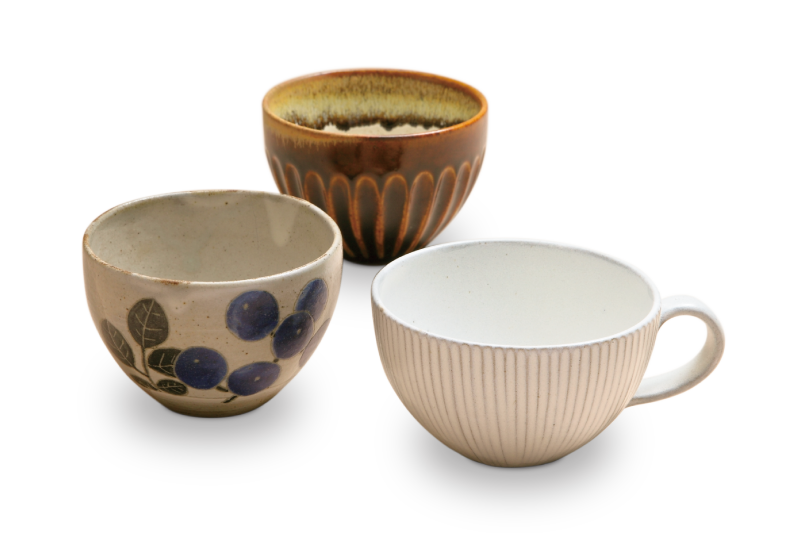 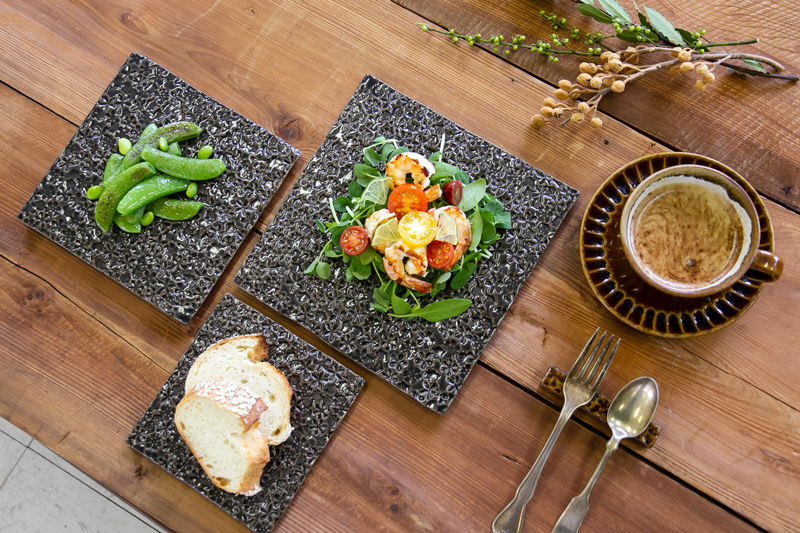 SUIGETSU-GAMA
Rustic and durable pottery showing the Aizu-likeness. Using local Okubo pottery stones as a main ingredient, and locally made Hatsukamachi–clay for painting, sincere “obsession to Aizu” lives in the creations from Suigetsugama, colored with patterns of Aizu Mishirazu persimmon and Okiagarikoboshi dolls as a motif. Difficult to break, strong, slightly thick porcelain has many simple designs, perfect for everyday use. It is rustic and can be loved forever. 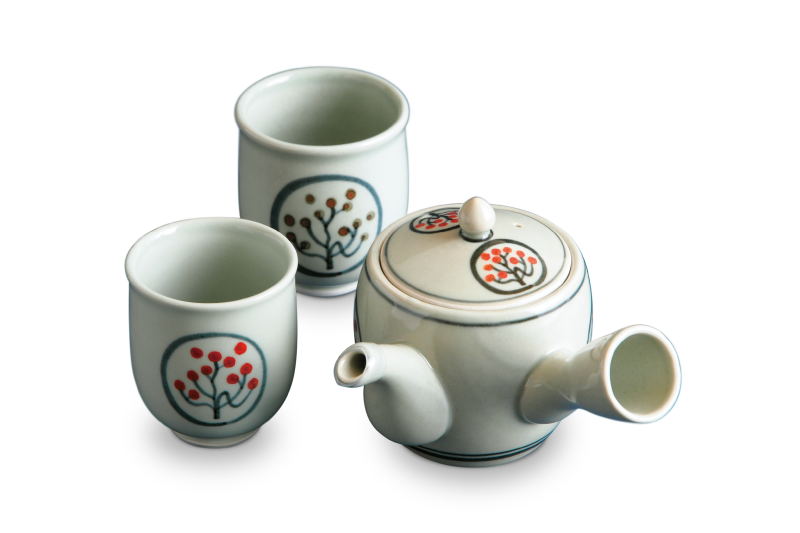 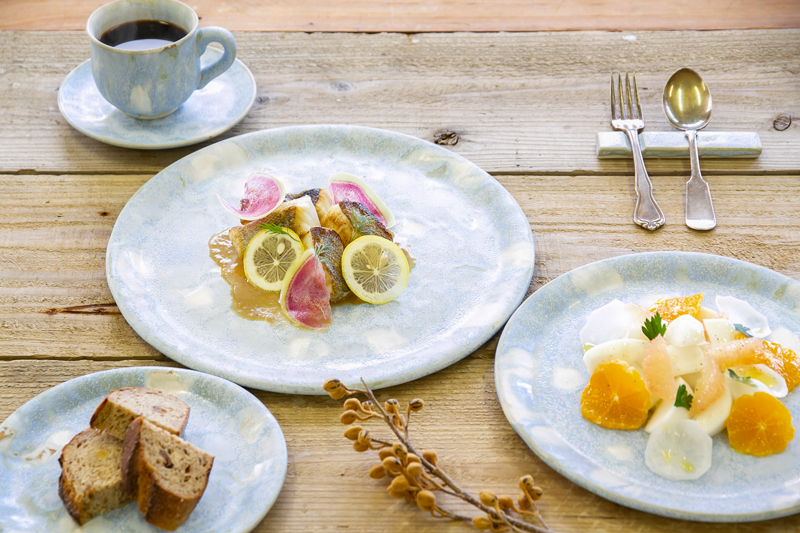 SOUSHUN-GAMA
Beautiful and strong.A worldview made by scraping. Among the potters of Aizu Hongo-yaki that mainly focuses on pottery, Soshungama that devotes to white porcelain is a rare existence. Glamorous and beautiful vessels of white porcelain produced from the hands of Hiroshi Tasaki that tells us "I want hands like a machine, to be able to create items exactly the same. After that I want to add my own expressions," are functional yet have attractive shapes that makes you want to reach out for them. Vessels that make you touch, feel, and be captivated. 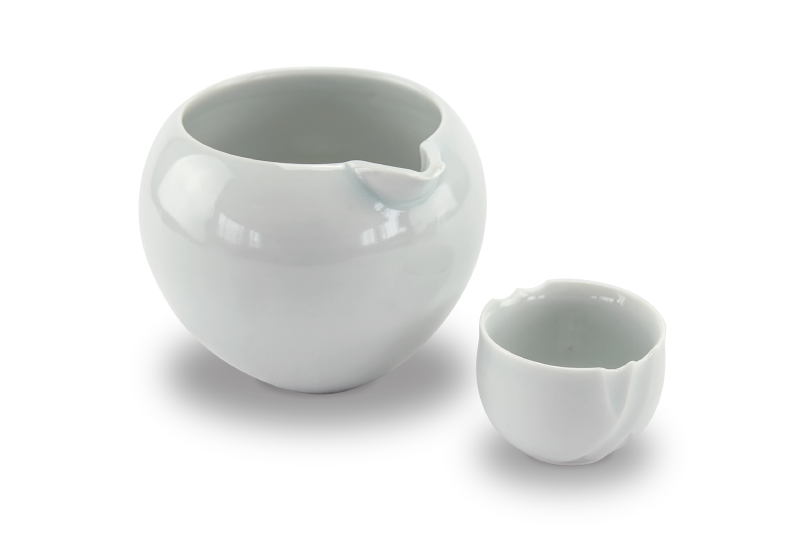 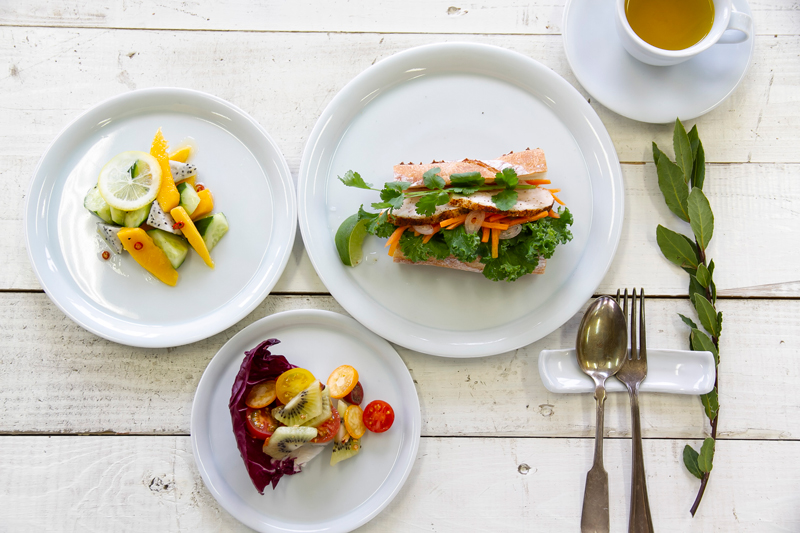 TOUGATOURAKU
Send out old-fashioned Aizu Hongo-yaki,to young people, and to the world. The original head started after the Boshin war, and the fourth generation switched from white porcelain to pottery. Since then, they have created with traditional ameyu glaze and and ash glaze. Recently tourmaline from Ishikawa Town is mixed with clay, to pursue the rustic and gentle texture in which the warmth of soil can be felt. They propose the future lifestyle, with the thought of "we wish people enjoy the tinge that comes out by using it for a long time". 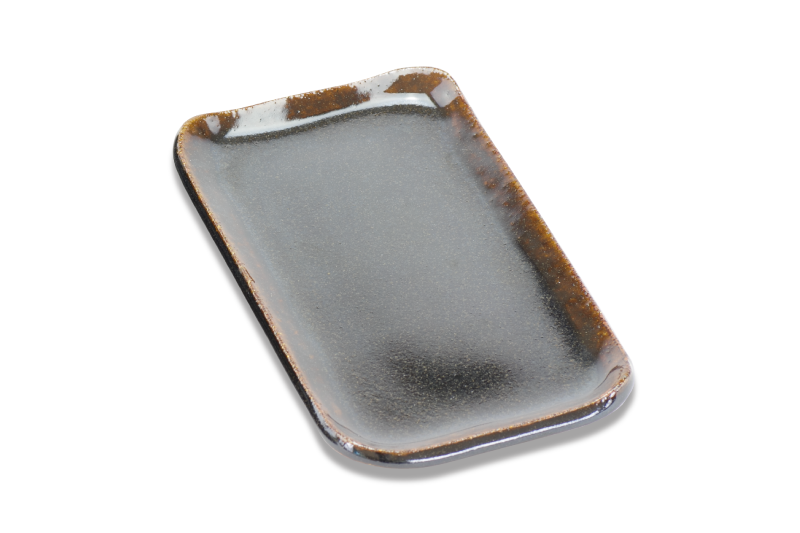 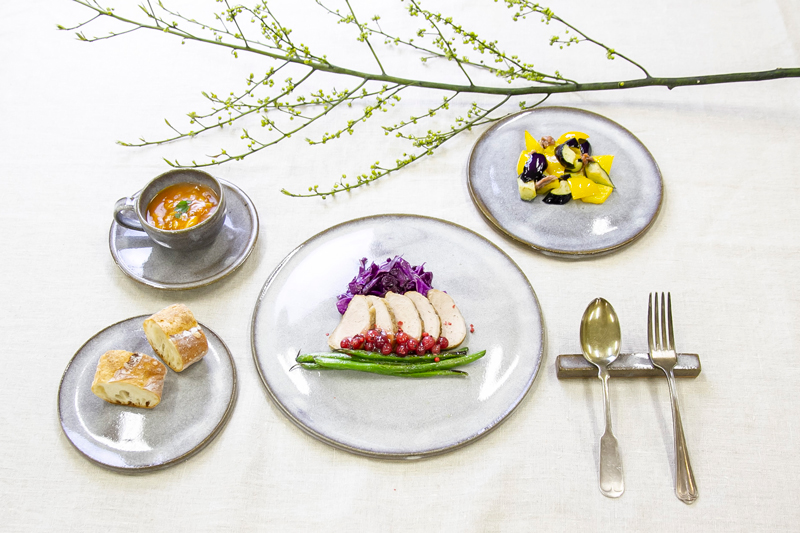 TOUBO-IRORI
A collaboration of different expressions made by two people.The aim is to create pottery that is not a big deal but brings color into normal life. Pottery of Toubo–Irori born from such thought is full of freedom, making use of personality and technology, such as using “Akabeko” a folk craft of Aizu as a motif, or creating a “rokurome” pattern.The pottery created one by one with the wish "To make people who use it smile", the warmth of hands can be felt. 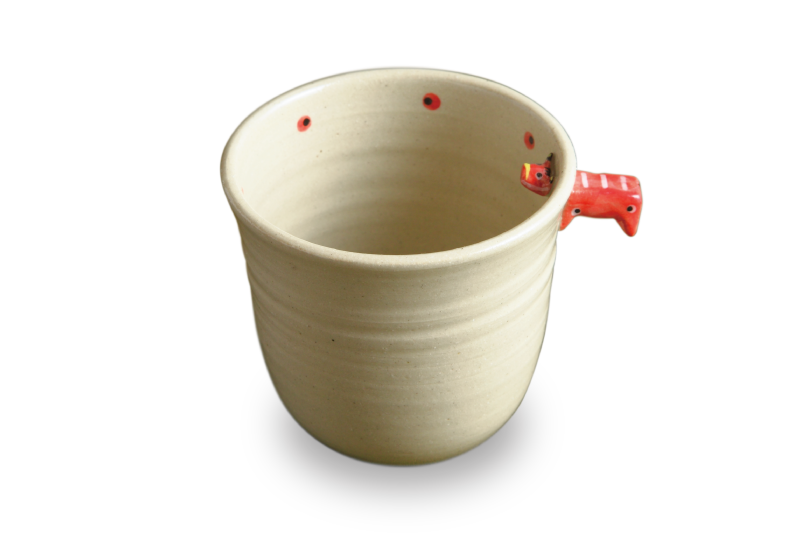 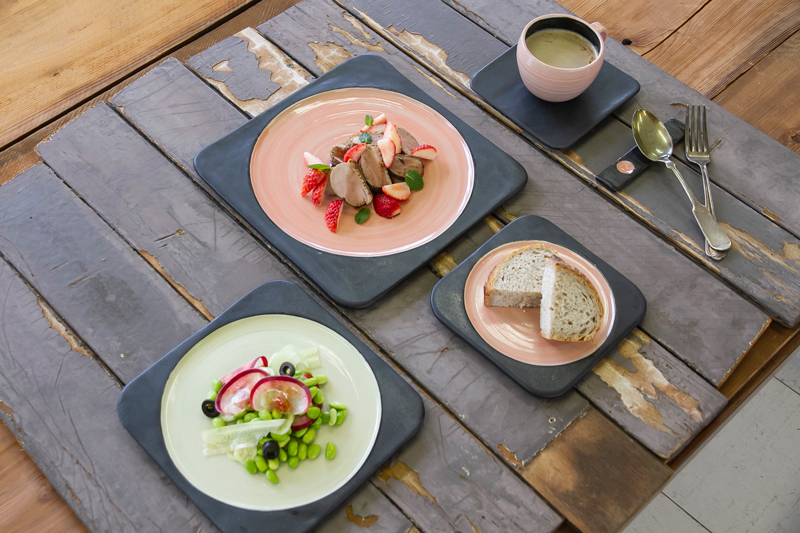 TOMIZO-GAMA
Respect to traditional patterns,and to people that uses them. He is known as “Tomizo of the Camellia”. Started pottery in Meiji 5, and ever since the fourth generation head made Japanese camellia flower its motif, this large flower became the representative pattern for Tomizogama.It is sometimes brilliant, and sometimes calm. Delicacy can be found in the red color of the camellia that changes nuances variously depending on the work. Traditional patterning is combined with designs of the time, by imagining the people and occasion of use. 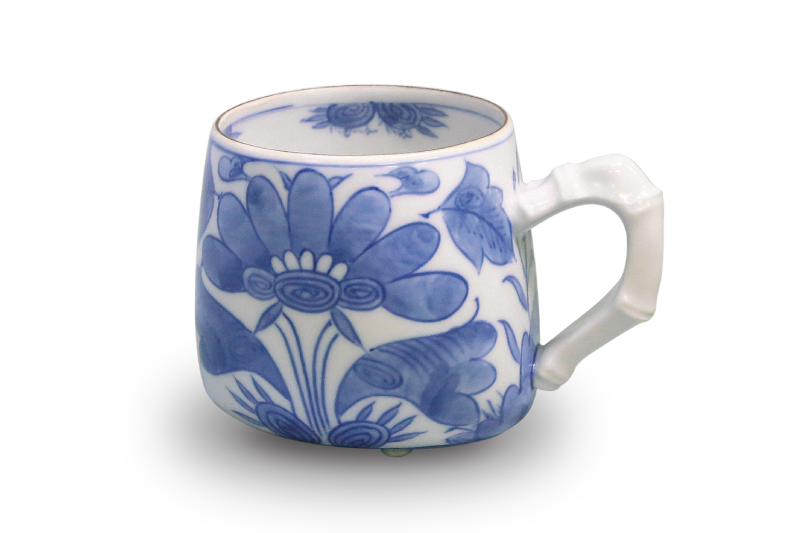 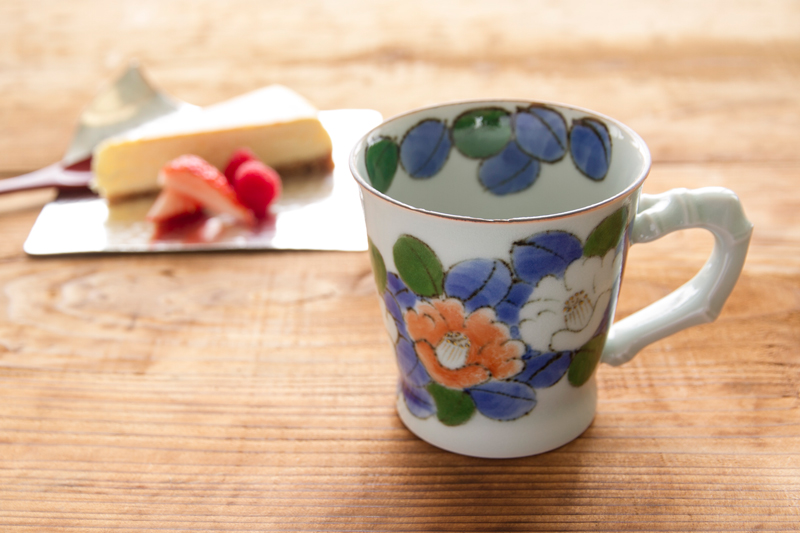 HOUZAN-GAMA
Words are not necessary. Aloof traditional skills.Started in Meiji 20. Creation is obedient to technique that has been inherited for many years, such as Sometsuke Sansui and Iroe Kamon. Not to mention the mountains and water, Camellia and autumn flowers are present in their unflattering natural forms, and their noble and solitary figure attracts viewers. The commitment of the craftsmen that want to provide warm, hand-drawn pottery can be felt. 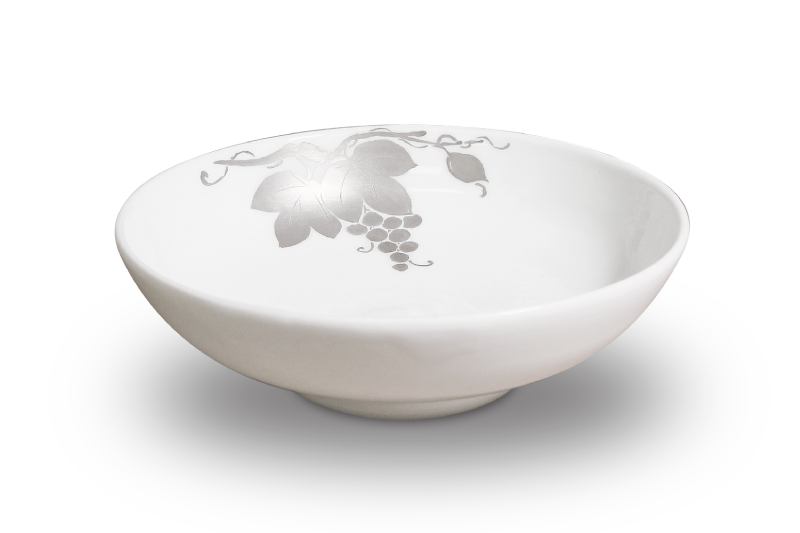 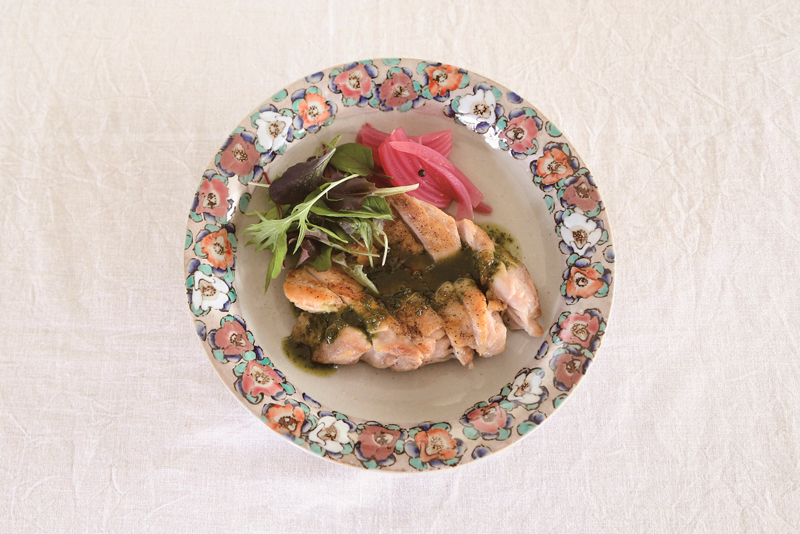 MUNAKATA-MAYUMI
Delicate and soft white,opposite to the tradition that her father and brother succeeds.Attained independence from "Munakatagama" in 2011. Under the concept "Vessels that have sense of cleanliness, exciting to use, and makes you feel happy", works that incorporate contemporary design while keeping tradition alive are aligned. Some works have a sense of feminine delicacy and lightness, such as patterns of lace, flowers, and oriental patterns. The sensibility of the creator can be felt alive inside. 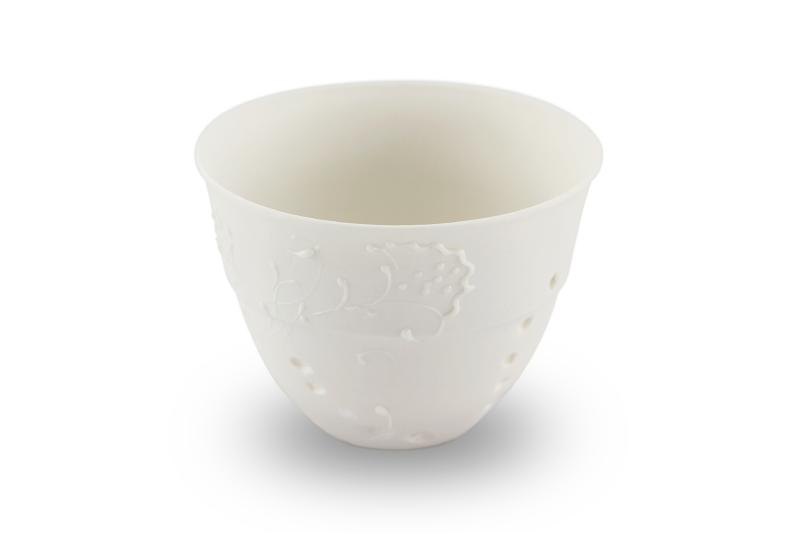 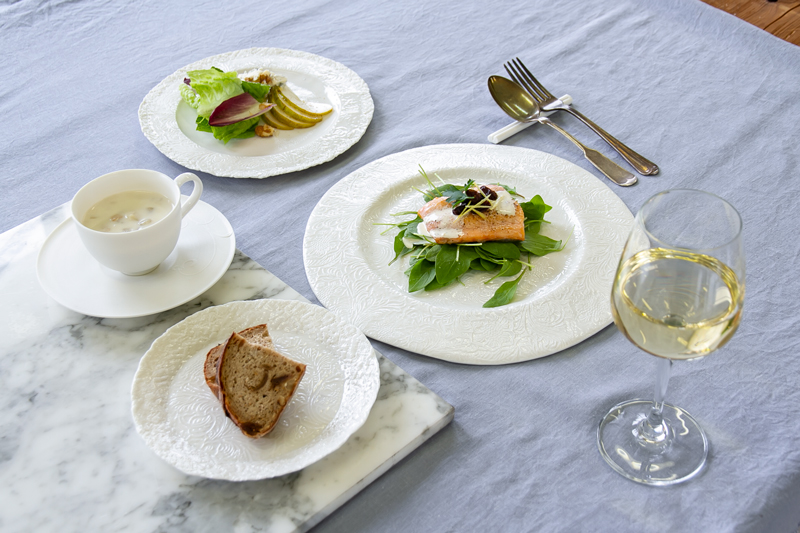 MUNAKATA-GAMA
Not only color, shape and skill.The essence is hidden inside. Munakatagama has its origin by its ancestor, a missionary for Munakata Taisha shrine in Fukuoka, who started pottery beside his work as a priest. Being picky about local soil and glaze, they continue to protect the old-fashioned technique of using soil ash glaze (Dobai-Yu) prepared by mixing ashes of oak or pine ash in the glaze. Not only the shape and color of the appearance but also the attitude that values what is hidden inside is supporting its long tradition. 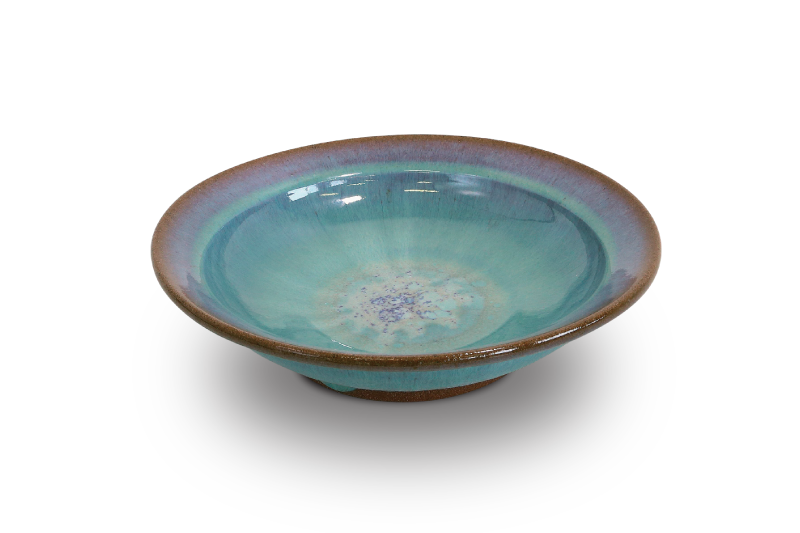 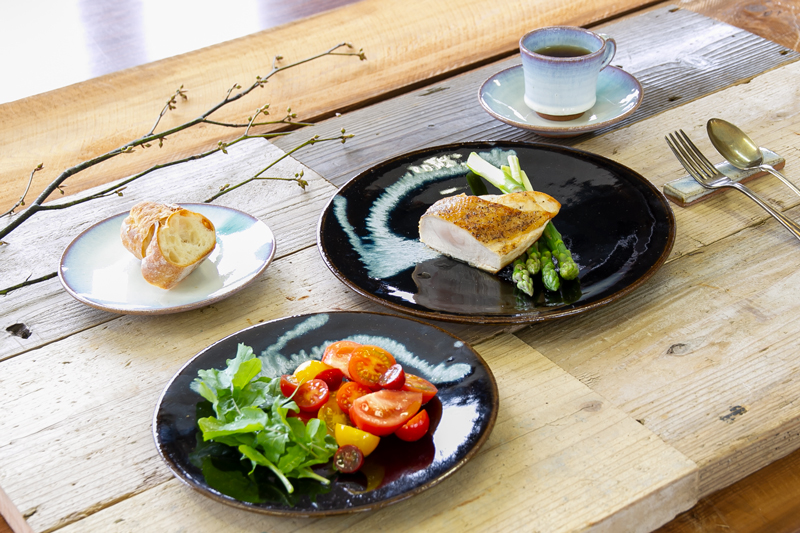 RYUMONYAKI
There is not one same thing, the expression of the natural mind.The foundation of Ryumonyaki was Meiji 33. The unique pattern created by glaze "Nagashiyu", developed by utilizing insulator manufacturing technology, is born by the melted glaze running down in the kiln heated to 1250 degrees. The pottery created as "not to lose the natural mind of soil as much as possible", like nature itself, has not one of the same thing, and full of rich personality. 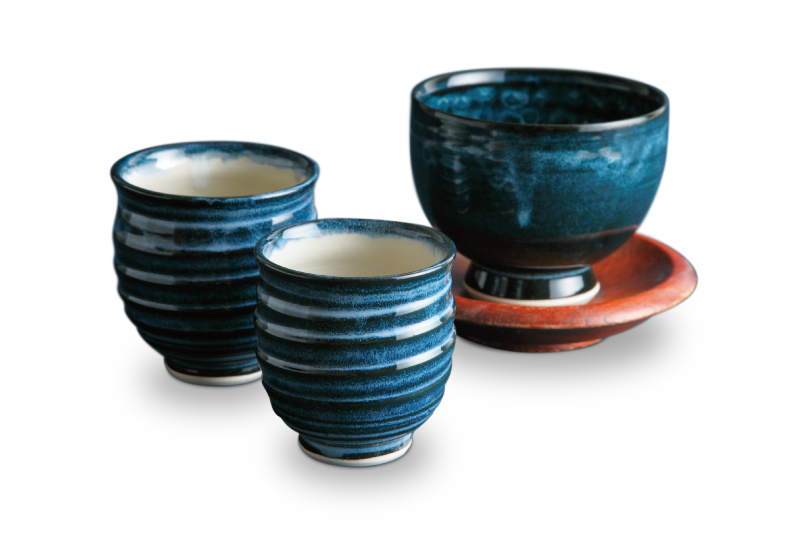 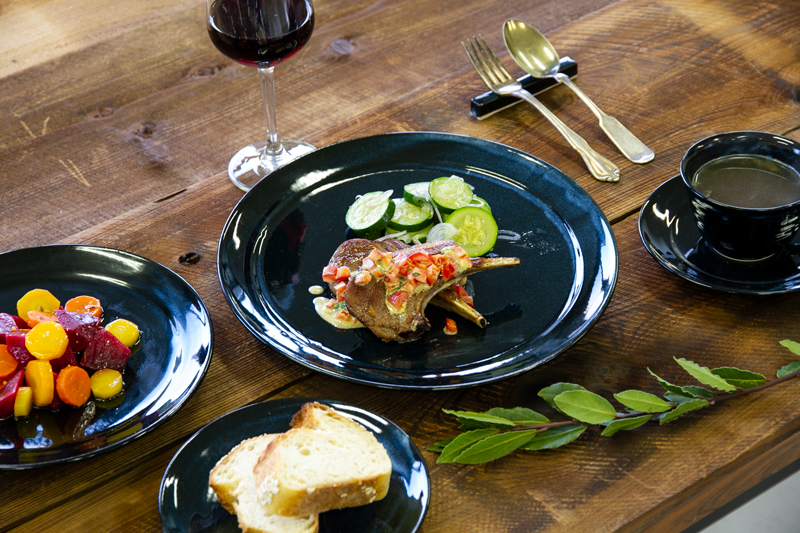 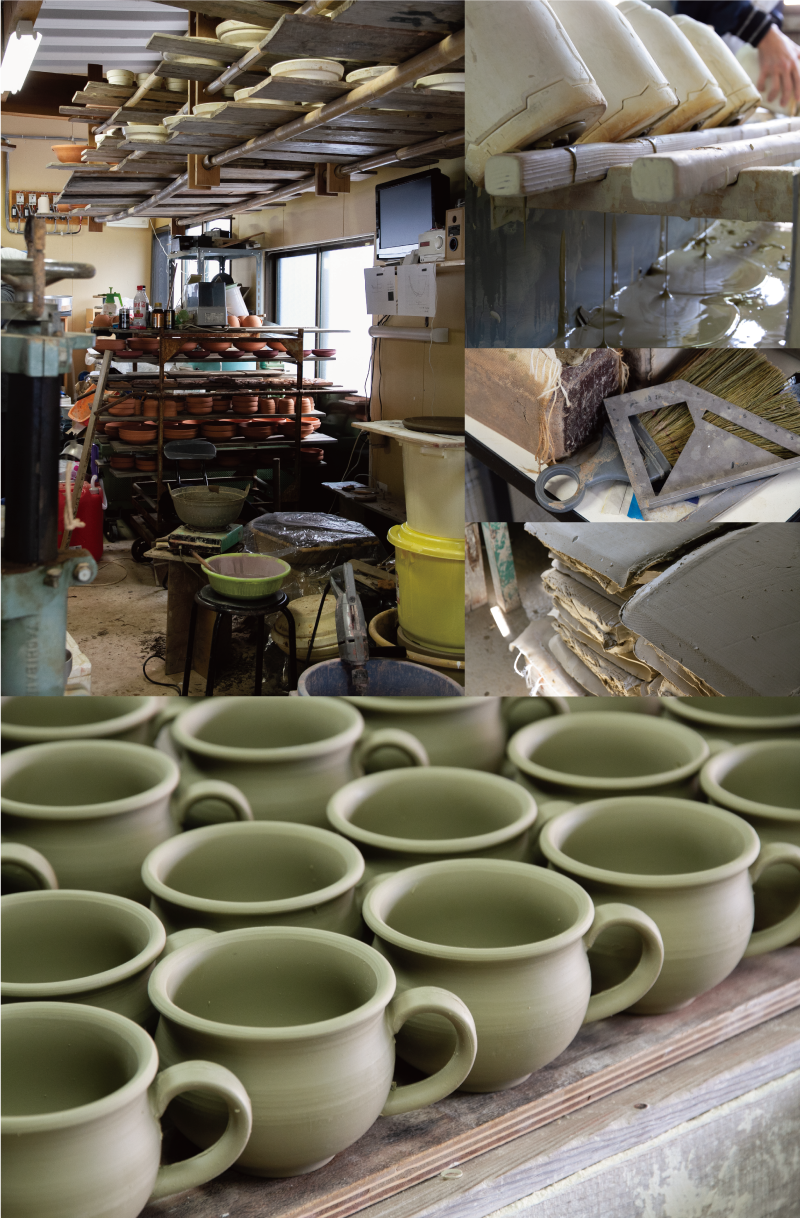